Ratten (ラッテン Ratten) is a member of the community [Grim Grimoire Hamlin] and serves Black Percher. Ratten is the personification of one of the four ways in which the Children of Hamlin vanished; the Piper that controls rats and can manipulate people through a sweet melody.

Ratten was summoned one day alongside Weser and Strum by those of the Ouroboros Alliance. They were given to the service of Black Percher and together they created the [Grim Grimoire Hamlin].

Ratten is a beautiful woman who is stated to look no older than twenty. She has fair skin color, blue eyes, elf-like ears and short blonde hair (said to be white in the light novel) with long bangs. More often than not Ratten is seen with a silver flute in her possession.

Ratten is described as wearing skimpy, white clothing. Her attire consists of a simple pointy hat, a cape, undergarments, puffy leg warmers and heeled shoes, with parts of the outfit being lined with purple.

Ratten is a mischievous and prideful demon that doesn't take kindly to imposters. Ratten's preferred form of fighting is through manipulation with her flute and gladly takes control of whomever she desires and making them perform sadistic actions such as forcing the victims to fight their own comrades or forcing rats to attack others. She also seems to possess a bit of a masochistic nature as she took Percher's insult and threat as a form of praise. Ratten is also one to be jealous easily, such as her pouting when Percher gave Weser [Divinity].

Even so Ratter is incredibly loyal to her community and faithful to her word. Although she already knew that she was going to lose, she complied with Kudou Asuka wish and battled with all her might till the end of her life. Even at the end Ratten asked for Asuka to tell her master bye and willingly accepted her loss.

Weser - Ratten's fellow community member and a demon like herself born from the tales of The Pied Piper of Hamlin. The two are good partners and work well together, even if Ratten tends to find him annoying at times. She grew jealous that Weser recieved [Divinity] from their master, but she did not hold that envy for long.

Black Percher - Ratten works for her along with Weser. Ratten loves to tease Percher and using an affectionate way of speaking to the Demon Lord. Even when Percher threatened her Ratten simply took it as praise. Ratten is extremely loyal to Percher for taking up the name of a community for their sake and held the girl in high regard, even as Ratten departed. Her final request was for Asuka to tell Percher she said bye, a form of saying she was sorry for failing her master.

Kudou Asuka - Ratten took an interest in Asuka due to her power and her connection with the then nameless Merun. Originally Ratten wanted her as a toy to mess with, and even asked for the red dressed girl at the negotiation table. The two ended up clashing in battle with Asuka controlling Deen and Ratten controlling the Strums. In the end Ratten could not defeat her and simply asked Asuka to deliver a message to Percher, her saying goodbye.

Ratten did not show herself in person, but she controlled thousands of rats to attack the one deemed as an imposter, a small fairy that was traveling with Asuka at the time. In the end though her rat were defeated by Leticia Draculea. As such Ratten laid low until it was time to strike the following day.

[Grimm Grimoire Hamlin] assaulted the community [Salamandra] during its festival and inauguration of the new Floor Master, Sandora. Ratten and Weser appeared from the giant wall but both ended up being assaulted by an incoming Izayoi. Originally Ratten just watched the boy drag Weser up the wall,when Weser trapped Izayoi,Ratten was told to leave and perform her duties.Ratten left in small disgust and flew towards the town.Playing a melody on her flute she took control of several of the soldiers in the area, forcing them to attack both their community members and other people. Ratten revealed herself to the group of Shiroyasha, Jin, Asuka and You. Ratten sent the mind controlled soldiers to attack them but Yo used her power to blast them away. Ratten played another melody on her flute, but this one did not take control of any of their minds and was simply meant to paralyze them a bit due to the harsh frequency of the noise.

Before Ratten could control You, Asuka activates her powers and not only orders Jin to take You away but also for Ratten and the soldiers to stop pursuing the runaway boy. Ratten breaks free from the girl's control and lands a hit that causes Asuka to collapse. Ratten knocks Asuka out, intending to use the girl as a toy later, then proceeds to play her melody of manipulation once more. Though the melody was not used for long as Ratten was stopped by the Invocation of the [Judge Master]. As such the game went on a suspension until further notice.

Ratten joined Weser and Percher as representatives for the community [Grimm Grimoire Hamlin]. She mostly remained silent until Percher made the deal of having the communities surrender and join the Demon Lord's community. Ratten immediately asked for Asuka to be included, to which Percher agreed. In the end the game would restart in seven days with a time limit of 24 hours.

During the break Ratten observed the many members of [Salamandra] developing the Black Plague. She decided to take the time to tease her master while wishing that either Cinderella or Snow White were around so she could take control of the populace to make a tragic play. Ratten then brought up the meaning of being a [Demon Lord] in Little Garden, and that by Percher taking up the position she will be forced to fight until she dies. But Ratten swore to stay by the girl's side forever, swearing her allegiance to the one who has taken up the mantle of the [Grimm Grimoire].

The game resumed at its scheduled date. When the city of Hamlin was summoned to replace the Koen City, Ratten took the Strums to attack the search party. However she was stopped by the timely arrival of Asuka and Deen. Ratten was happy to see the cute red mouse, and learned that Merun's community protected Asuka. Ratten attacked Asuka with the Strums, but each demon was defeated with ease by the red giant. Ratten tried to go for a sneak attack but Deen caught her in its grasp, causing massive internal damage from the grip. Ratten was released by Asuka and given a chance to defeat her. If Ratten could take control of Deen away from Asuka then Asuka will concede defeat. Ratten decided to challenge the girl in her game, and performed her melody. Sadly she was unable to take control of Deen. Realizing she had lost the demon began to fade away. Before she vanished Ratten expressed her gratitude for the game and for listening to her tune.

Flute: Though unknown if the flute itself is a gift, Ratten demonstrated to control monsters and humans alike via by playing music. The melody she plays is described as being both beautiful and able to fall into a daze into. Ratten only has to play a few notes to take control of a person completely. However there seems to be a limit as Ratten was unable to take control of the minds of the [No Names] and instead only caused them pain whenever they heard the flute.

Flight: Ratten is able to levitate and fly great distance by herself. 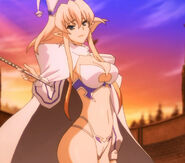 Retrieved from "https://mondaiji.fandom.com/wiki/Ratten?oldid=21613"
Community content is available under CC-BY-SA unless otherwise noted.