The No Name is the anime show's main and primary community. It lacks a flag and name, but the Problem Children aim to get its old flag back and return the community to its former glory.

The No Name first appears in Episode 1, the with the mentioning of the leader Jin Russell and a member named Lily as well as other children. In Episode 2, Black Rabbit leads the group to the No Name Community location, which is its first major appearance in the show. The community used to be a more powerful, thriving community, however, it lost its flag and name in a Gift Game after losing to a Demon Lord. After that. the community is rendered infertile and ruined, looking like it had been deserted for hundreds of years.

As Black Rabbit stated, in the Little Garden, anyone can create their own communities, collectives, and societies. In this case, this community is an organization that stands out, even without a flag.

The location of the No Name is the Gates between 6 and 7. In other words, their community is closest to the outer edge, which is certainly in Gate 7. One evidence is that their community has a seven digit gate number: #2105380.

Previous Generation Members that were stolen/lost and not returned yet....(list that is known)

First and Second Volume and in anime: 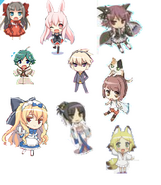 Retrieved from "https://mondaiji.fandom.com/wiki/No_Name?oldid=21775"
Community content is available under CC-BY-SA unless otherwise noted.