Mandora is a bronze skinned humanoid dragon with thick horns that frame the side of his head. The black horns appear to grow out sideways. Mandora's dark red hair grows up but the hair has been given a clean cut. A small bang sticks out from the middle of his head and points downward. Mandra also possesses another set of horns but they are tiny black ones that grow from his chin. Mandora has large, pointy ears and green eyes.

Mandra is described as being dressed in a military uniform, which is accurate due to his position. The overcoat he wears is  dark green with white and gold details trailing along the ends of the sleeves and the front. On the back of the overcoat is the symbol of [Salamandra] stamped in red. The robe underneath Mandora's overcoat is a dark teal with a light green shape that takes up most of the front of his robe. Mandora wears a pair of sandals. Regardless if he is on duty or not he possesses a sword that he wears on a strap around his waist with a dagger tucked inside the belt.

Serious and very rigid with the rules, Mandora is quick to anger when it comes to rules being violated or the proper respect not given to his community. He does not place past relationships into account when it came to matters regarding formalities, such as refusing to see the No Names as friends because they had lost their Names, even though they were allies in the past. From another perspective, he shows contempt and disrespect to those who are inferior or outside of his Community for he may believe that allying with the strong is the best way forward for his Community. In short, fiercely loyal to his Community and wanting to protect his younger Sister, Sandora Doltrake. Mandora is willing to do anything for that end.

Sala Doltrake - His elder sister and originally the one to be the next Head of [Salamandra]. Mandora considers his sister a traitor to the community for leaving them and unintentionally forcing young Sandora to take up the position when their father became sick.

Sandora -  Mandora's younger sister and new Leader of [Salamandra]. Mandora is fiercely loyal to her and only looks out for her best interests. Though he has a tendency of placing too much pressure on her as the head of [Salamandra] and often times doesn't agree with her actions, such as summoning the [No Name]s to take part in her festival upon her coronation and to prevent a Demon Lord attack.

Sakamaki Izayoi - Though their relationship started off on a bad note with his attack blocked by Izayoi's leg, it was somewhat better after Izayoi exposed his secret and forgave him in a very indirect manner for something that even he did not forgive. Carrying that guilt with him all his life as his responsibility and loyalty to the Community. Time and time again, Izayoi would test his patience with his trouble making but yet time and time again, Izayoi would appear to lend him a hand in keeping the peace of Koen City, causing Mandora to trust him.

Kudou Asuka - She was along with Izayoi and Yō when Izayoi did the trouble making in Koen City and they were chased by Mandora and his troops. Not much of a relation formed.

Kasukabe Yō - As with Asuka, she went with Izayoi to make trouble for the warrior. Not much of a relationship has formed but it is implied Mandora has some respect for her power.

Shiroyasha - As the Floor Master of the East, Mandora possesses some respect and fear of her. Even so, Mandora became part of the conspiracy to trap Shiroyasha in a Gift Game to ensure Sandora be the one to defeat the Demon Lord.

During Mandora's younger days, it was noted that his dragon horns did not have a good development and soon it was apparent that he would not be able to be as strong as his sisters. One day his sister, Sala Doltrake, left the community, and thus the succession of the community leader was forced onto Mandora's youngest sister Sandora. Mandora continued to train to serve in [Salamandra] as the leader of the Military Police and the future Floor Master's adviser and consultant.

Mandora was alerted to the disturbance of the Gift Game between Black Rabbit and Izayoi and headed out with a few troops to stop them. After arresting them Mandora took them to the main headquarters for the [Rise of the Fire Dragon] festival to meet with Sandora. The salamander wasted no time in scolding them and demanding repercussions for their actions. When Izayoi gave his callous response, Mandra shouted back before being silenced by Shiroyasha. Mandora was against Sandora's decision to pardon them and remained silent.

That changed when Jin spoke to her like an old friend, Mandora drew his sword at Jin, though it was stopped by Izayoi. Mandora showed no remorse in attacking Jin and even admitted that [Salamandra]'s honor was being tainted by inviting the 'failures' to the festival. Mandora began to wonder if the [No Name]s and [Thousand Eyes] made up the rumor circulating in the North to get back at them. Sandora had enough and called out her brother on his actions, causing him to remain silent for a good amount of time. Mandora grew angry with Shiroyasha's reluctance to speak of the culprit that would attack, calling her out on it even. In the end Mandora had no choice by to accept the [No Name]s help in taking on the Demon Lord.

The next day during the Gift Game <<UNDERWOOD MAZE>>, Mandora watched the game while standing alongside his sister. When Izayoi and Shiroyasha spoke about their views on Black Rabbit's skirt, Mandora told Sandora to not listen to them in fear that their little tryst might end up affecting the child. Mandora observed the game and witnessed the winner of the Game. Around that time, Black Geass Rolls began to fall from the sky. Mandora was blown off the balcony with Sandora and sent outside of the Colosseum due to the sealing of Shiroyasha.

Mandora decided on helping the people evacuate from the Colosseum. When the flute of Ratten began playing he watched as some of his subordinates were forced to fight one another due to the mind control.

The game went on suspension and Mandora joined his sister, Jin Russell, Izayoi, Black Rabbit, Ratten, Weser and Black Percher at the negotiation table. Mandora explained to Izayoi that in order for the game to be suspended indefinitely there must be a contradictory in the game rules and the best place to start would be with Shiroyasha's sealing when she is meant to be both a player and a [Host]. The negotiations continued with Mandora showing surprise at Percher being the literal Black Plague. When it was mentioned that the pathogen was installed into several of the competitors, to prevent Percher from gaining ground Mandora threatened to kill anyone who showed symptoms of the plague, completely adamant in his decision to do so. In the end the negotiations came to the conclusion of the game restarting within a week and if the competitors could not solve it within 24 hours, then the community [Grim Grimoire Hamlin] automatically wins.

The game resumed after the break and Mandora searched the city with others of the community to locate the glass panels to solve the game. Even when Koen City became Hamlin, Mandora still took charge. The search party managed to find the three glass panels depicting the true legend of what occurred at Hamlin and gathered them together. The game ended with the defeat of [Grim Grimoire Hamlin].

Mandora received a letter from [Thousand Eyes] congratulating the community and the new Floor Master. Mandora realized he cannot do much with [Thousand Eyes] watching them. Izayoi smashed through the roof of the office and confronted Mandora about [Salamandra] luring the Demon Lord to the festival. It was [Salamandra] who hosted the exhibition and thus moved the glass panels that activated the Grimoire of Hamlin into the city. Izayoi deduced that the festival was used as an initiation to show that Sandora could perform her job and thus exterminate any doubts people might have of her. Izayoi's declaration of killing Sandora and everyone else in [Salamandra] if his comrades were killed caused Mandora to speak up in desperation, revealing everyone BUT Sandora knew of the plan. Mandora asked Izayoi to only kill him and spare his comrades lives, but in the end Izayoi was satisfied that everyone knew what they were getting into. In exchange though [Salamandra] would have to be the first community to come running should the [No Names] be in a tough situation. Mandora agreed to the condition with satisfaction.

So far Mandra's Gifts have not been shown, nor is it stated that he even has one due to the poor growth of his horns. However as a Lesser Dragon Mandra possesses a strength that is much higher than humans.

Swordsmanship: Mandra always keeps a sword and dagger close by to him to utilize for fighting. Mandra has shown some skill in using a blade, but not enough to effectivly determine his skill with it. Though it is possible to say he must  be good as he has been training with one for a while and is the military leader for the [Salamandra] Military Police. 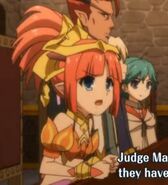 Retrieved from "https://mondaiji.fandom.com/wiki/Mandora_Doltrake?oldid=20928"
Community content is available under CC-BY-SA unless otherwise noted.