Lily (リリ Riri) is a child Kitsune, one of the many children of the community [No Name]. As part of the Senior Group and the Den Mother of the children, her duty is to tend to the care of the Core Members as well as the various chores around the house and farmlands.

Lily has been part of the community since birth, her family was in charge of the plantations and Residential Districts. She was raised alongside Jin and befriended Sandora. When the Community was struck by the Demon Lord's attack, three years prior to the start of the story, all the adults were taken away as the loot of the Game. She would have been taken but was subsequentally freed through unknown means (Implied to have been paid for). Since then she has worked with the children as the head of the Senior Group, fetching water from the nearest rivers and cooking.

Lily is a young girl with fox ears and two tails. Her hair, while being short with pointed, flared out strands, has the same color as her tails, blonde with brown tips. She is mostly seen with her white, long sleeved apron on, but underneath it is a orange miniskit and light orange shirt with two, etched cross stitches.

Cheerful, caring and innocent, Lily possesses a maturity far beyond her age. Lily possesses a strong sense of responsibility, willingly performing her duties without complaining or second thought. She is entirely devoted to the rules of Little Garden and cares greatly for the members she helps take care of. Alongside her responsible nature, Lily shows an amazing resolute nature fully believing that the community can be revived and that she can be with her mother once again. As such she works diligently so as to not shame herself, her mother or her ancestors. Lily's altruistic nature lets her sympathize with others and develop new friendships with beings such as Coppelia and the three problem children.

Even so, Lily is rather stubborn when she comes to a decision and is rather serious when part of a Gift Game, as shown in the OVA as Lily was determined to win with Asuka.

Jin Russell - Jin is an old friend Lily was raised alongside. When Jin was elected leader of the community, Lily supported him in anyway she could.

Sandora - Lily and Jin are long-standing friends with Sandora as their communities were once allies with each other. Even after the alliance was broken off, they still remain on friendly terms with each other, even if Lily belongs to a No Name community.

Sakamaki Izayoi - Lily gets along quite well with Izayoi and vice versa. When Lily told Izayoi about her mother, the boy responded that he would help Lily find her. His promise was greatly appreciated by Lily. When the battle with Azi Dahaka was placed on hiatus, Lily helped Izayoi heal up alongside Shirayuki. The kitsune was heartbroken to see Izayoi in that state and brought to tears while trying to clean his wounds. In the end Lily cares for Izayoi as more than just a gift player she is meant to support.

Kudou Asuka - Lily and Asuka don't have much interaction but both seem to be on good terms with one another. Lily cares about Asuka and even made cookies for her with other children to cheer her up after her argument with Black Rabbit. During the OVA the two were partners and worked rather well together.

Kasukabe Yō - She has little interaction with Yō, but when she does its obvious the two are good friends. She assisted Yō in helping the sick and injured during the <<PIED PIPER OF HAMLIN>> gift game.

Leticia Draculea - The two come from the same community and are good friends. Even when Leticia is a maid Lily is always polite and respecting her.

Coppelia - Lily desperately wanted to help Coppelia from her situation and was near heartbroken when the others were more inclined to the option of sealing the doll away with the Demon Lord End Emptiness. When the game was solved Lily remained very good friends with Coppelia.

Lily was out fetching water from a river a few kilometers away with various other children. When she met Izayoi, Asuka and Yo she bowed and showed respect just like the other children. After the meeting with Laius at the [Thousand Eye]s shop, Asuka and Black Rabbit had an argument. Lily and the other children baked cookies to try and cheer the two up. With the defeat of [Perseus], Lily attended the small victory party and watched the sky as the [Perseus] constellation was removed from the sky.

Lily was alongside Yō when both woke up Asuka to show her the letter from [Thousand Eyes], which was an invitation to the Rise of the Fire Dragon festival. When they found Izayoi and Asuka performed a Shinning Wizard on Jin, Lily took care of Jin up until the two children were whisked away. Originally Lily was against heading to the North Side but was forced to go along as the group headed to the [Thousand Eye]s branch where Shiroyasha was residing. After speaking with her Lily commented that her community and [Salamandra] used to be old friends until the Demon Lord attack three years ago. Lily was just as shocked as Jin to learn [Salamandra] would be appointing a new leader and that Sandora would be taking over as Floor Master.

With promptitude from Izayoi, Lily and the others were brought to the North Side. Lily admired the beauty of the North Side, but was quick to change her attention to the arrival of Black Rabbit. Lily was left with Jin, Shiroyasha and Yō as Black Rabbit left to go locate Izayoi and Asuka, whom had ran away on sight of the rabbit. However she was brought with Leticia to find the others and managed to stop Asuka, but Izayoi escaped with Black Rabbit in pursuit. With Leticia and Asuka, Lily bought a crepe from a small dessert stand. Shortly after meeting a small fairy, Asuka gave chase to it and Leticia followed her, leaving Lily by herself with Calico Cat.

During the time Lily found her way back and met up with Jin, being there when Izayoi and Black Rabbit were being scolded by Mandora for the disturbance their game caused. When Sandora managed to smooth things over, she greeted her old friends, which Lily was happy to see her again. Lily took the conversation about the Demon Lord prophesied to attack in stride and allowed Jin to declare that the [No Names] would assist [Salamandra]. Later that night Lily attended the bathhouse with Leticia, Yō, Asuka, Black Rabbit and Shiroyasha, and remained behind when they left to give Leticia a back massage.

The next day, Lily watched Yō participate against [Will-O-Wisps]' main players Jack and Ayesha in the Gift Game <<UNDERWOOD MAZE>>. She was just as excited as the rest to see the location of the game. Despite Yō's loss, Lily was happy to have seen the game. Black Geass Rolls began to fall from the sky, signaling the start of the Gift Game <<PIED PIPER OF HAMLIN>>. Lily was blown from the Colosseum along with Sandora and Mandora. As such she opted to help in evacuating the citizens. When the Judge Master's Invocation was announced, Lily traveled back to the Colosseum and assisted in helping to treat the injured and sick.

When the game was restarted, Lily assisted in finding the glass panels and ended up being saved alongside Jin by Asuka. The game ended with victory for the [No Name]s. Lily returned home with the others and began helping out on the farmlands.

Lily attended the [No Name]s meeting to discuss about their current situation. Lily explain that due to the efforts of Merun and Deen the farmland was increased by 25% and that it was ready to support livestock and various sacred or herbal plants.

When Izayoi visited the farmland, he ended up asking about Lily's family once she brought it up. Lily told her story to Izayoi about losing her mother in the Demon Lord's Attack three years ago, where they had also lost all of their senior members of the community. She herself was also taken away, locked in a cage next to her mother, but was set free and able to return to the [No Name]s through negotiations. The reason her mother and Lily were taken was due to them both having the ancestor, the Shiro Kitsune (white fox), a Herald of the Uka God (full name: Ukanomitama), as such both had a great effect on plantations and being able to increase the quality and quantity of agriculture.

Lily placed on a smile as she finished her story, trying to make it seem she was not upset and that she would work on the plantation in her mother's place, as she believed it would be the best thing. However, Izayoi asked about a community linked to the herald that Lily was descendent from. Lily explained that there was spiritual mountain that stands in the South Side five digit region that lead to the Heavenly gates. Izayoi declared he would go to the community after the festival and ask the location of the Herald lineage. Lily was shocked and tried to turn him away until Izayoi declared this was also to find the Demon Lord who defeated the community three years ago and not solely for her. But then Izayoi declared Lily had to get back to work and prepare the farmlands for her mother to see as she would be coming back soon. Lily accepted the proposition and returned to her work, overflowing with happiness from Izayoi's words.

Percher and Shirayuki started fighting over what Lily was going to cook for dinner. Shirayuki wanted Japanese food, while Percher wanted western food. Jin was involved in this confusion until Leticia appeared and made Pest and Shirayuki play a game to decide on dinner. In the end Leticia, Lily and Jin decided to eat Chinese food for they did not have it for some time.

It is not known whether or not she has a gift. But it is said that her family has always been in-charge of the plantations with their ancestor the Shiro Kitsune [white fox] being a Herald of the Uka God (full name of Ukanomitama). However Lily is skilled in various household chores, especially cooking and working on the farmlands. 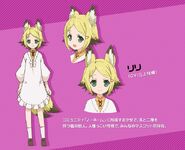 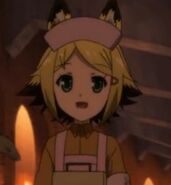 Retrieved from "https://mondaiji.fandom.com/wiki/Lily?oldid=15794"
Community content is available under CC-BY-SA unless otherwise noted.