Laius is a young man with dual colored hair in an odd pattern. Laius' hair from the top right to the bottom left is golden blond while from the top left to the bottom right his hair is dark brown. Blond bangs shield Laius' right forehead but barely reach his sharp, blue eyes. Around his neck is a black ribbon choker containing the pendant of a Medusa head. This pendant is what is used to summon Algol. He wears silver clip earrings on the horizontal lobes of his ears.

Laius original attire consisted of a jacket, a red long, sleeved shirt with the [Perseus] symbol stamped on it in a light pink, black pants, a grey belt and brown boots. Laius jacket is a snake skin jacket with the shoulders to the armpits are brown and the rest of the jacket is a sandy brown color.

In volume six he wears clothes one would find a blacksmith wearing; a dark colored apron containing the symbol of [Perseus] with similar colored gloves. A satchel rests on his hip with a wooden tool sticking out.

Laius is described as a person whom only loves three things; money, drink and women. Some have even called him the perfect example of a man drowning in hedonism, and this couldn't be more true. Laius shows respect to no one, not even Shiroyasha, and frivolously abandons his work whenever the time conveniences him. Laius has no problem acting in unnaceptable behavior even in places of negotiation as he hitted on Black Rabbit and even tried to blackmail her into serving him due to his lust for her.

His arrogance stems from his Gifts such as Algol and the Helmet of Hades that are in his Community's possession and looks down upon the No Names with disdain. Laius doesn't even seem to possess a level of caution for his community or the partners involved with him, as he decided to cancel a Gift Game promoted by [Thousand Eyes] just to sell Leticia to a generous buyer. It took the near destruction of his community and the threat of being a No Name that caused him to develop a sense of preservation for [Perseus].

Even so Laius is skilled in negotiation and is rather knowledgeable of Gifts, being able to recognize the sheer brilliance of Deen after one glance, and seems to possess a certain love for working on Gifts like Deen. After his community was stripped of most of its power and fame, Laius became a bit humble but still holds onto much of his arrogance.

No Name - Laius held the [No Names] in disdain originally due to them not possessing a flag or name. He refused to duel them as he seen it as useless to duel a no-name community with nothing going for them. However his defeat against them caused his viewpoint to shift. While he still has enmity towards them, he still forms an alliance with them, even after learning he was tricked into doing so.

Will-O-Wisp - Laius is currently allies with them and the [No Names]. The relationship between him and the community is touched upon lightly and not much is given as an explanation.

Laius inherited [Perseus] from his father the former community leader. After he passed on though Laius began making drastic changes that clashed with the traditions of the long history of the community. Three years prior to the story Laius bought Leticia from a slave auction but grew bored of her due to her attitude.

Laius arrived at Shiroyasha's shop after the news of the Gift Game regarding the rights to Leticia was cancelled. At first he had no desire to tell anyone himself and even gave the involved communities in the game some monetary reward until Leticia ran away. As such he decided to confront the most likely suspect in causing the situation. Laius knew where Leticia was and sent his men after her before coming to the shop, fully content with the [No Name]s being destroyed in the process if it should come to that. Laius antagonized Shiroyasha, but reminded her that even if he could kill her, with Algol he could take out the shop and everyone inside it.

The leader of [Perseus] remained at the shop even as the [No Name]s arrived. Upon seeing Black Rabbit Laius wasted no time in showing his shock and excitement at seeing the moon rabbit, even going so far as to ask her to switch communities in return for special care (Wearing a collar, three meals and Laius 'petting' her every night). He enjoyed watching the usual banter Black Rabbit had with Izayoi, Asuka and Shiroyasha, even asking the [No Name]s to join Perseus, believing they were an entertainment community.

Once the banter was completed Black Rabbit challenged Laius to a duel, in which he declined as Black Rabbit's testimony was baseless and without facts. He refused to release Leticia due to the possibility of her escaping again and of all of this being a plan done in secret to free the vampire. Laius was willing to do an investigation, but knew no one would go through with it as Shiroyasha broke the rules and in the end she would be the one punished the most. With that fact Laius decided to provoke them more by declaring that Leticia would be sold and fantasizing ways in which she could be used. He continued on by adding the fact of wanting to see Leticia's expression after she learns her community abandoned her.

This gave Laius the chance to make a deal with Black Rabbit. He told her he would trade the vampire in exchange for Black Rabbit's eternal servitude to him, poking at her race's nature of being selfless and sacrificing themselves for their friends. Laius was silenced by Asuka's power, but that did not last as he quickly broke out of Asuka's control, and in rage went to attack her. The blow was blocked by Izayoi and Shiroyasha threatened the group to calm them all down. While Laius was still miffed, he obliged. However Black Rabbit's offer to think about the deal caused him to declare that the offer was available for one week and left just as he announced it.

The week passed with Laius still entertained by the thought of having Black Rabbit in his community. When she arrived Laius was thrilled, believing that she would be joining [Perseus]. However he grew annoyed that she merely came to challenge him to a duel, but then became shocked as she revealed the treasures necessary to challenge [Perseus]. When he learned that Izayoi defeated the Kraken and Graeae, Laius was in disbelief. He accepted the terms of the duel, declaring he would make the community regret their decision.

During the Gift Game <<FAIRYTALE in PERSEUS>>, Laius remained in the Colosseum waiting for the players to challenge him. When Izayoi arrived with Jin, Laius commented that he would have to fire some of the guards as they couldn't prevent the [No Name]s from reaching the arena. Laius introduced himself formally, citing that this was the first time he ever done so. Laius decided to prove his power and summoned forth Algol to defeat Izayoi and Jin, taunting them for their decision to face him. Once the battle started he swiftly changed his cocky attitude. Izayoi devastated Algol and destroyed her power in the process, as well as destroying each and every attempt Laius took for an attack against the boy.

Laius was ready to accept defeat as he had no choice, but was stalled as Izayoi declared that he was never after Leticia but the flag of [Perseus]. When Izayoi issued a second game, that for [Perseus]' name, Laius realized the situation he was in. If he lost his community would be rendered to no-name status. As such Laius went in for a last attack, but was punched by Izayoi. [Perseus] lost the game, and due to Laius' decisions [Thousand Eyes] broke off all ties to the community and removed the Perseus constellation from the sky.

Gift Card: A fragment of Laplace that stores Gifts of any kind. Laius possesses one with the stamp of [Perseus] emblem on the back of it and contains all of his gifts minus Algol.

Boots of Hermes:  A pair of winged boots that grants Laius the ability of flight. The boots were an item from the Greek God Hermes to be used to travel to Medusa's lair. Unlike the replicas worn by the guards of [Perseus] Laius boots are the original item.

Hades Helmet: The original helmet that grants the user to become invisible, masking them entirely, even the sounds they make and the user's smell. However the gift is useless when a sonar, or ultrasonic waves like in echolocation is used.

Harpe: The [Celestial Spirit Slayer], the harpe possessed the ability to kill those of Star Class Level. The harpe was used to cut off the head of Medusa, or Algol in this case and used to subdue her. As such it is a weapon capable of killing gods.

Algol: Laius' strongest Gift, a former Demon Lord that is the personification of the Demon Star. Algol possesses the power of petrification, which is stated to being able to turn a whole world into stone. Algol can change her hair into snakes to bind someone and increase her body size and mass while utilizing the bindings on her like whips. However it has been stated her spiritual power was greatly cut and due to Laius inexperience and ineptitude, Algol is severely weakened and was easily defeated by Izayoi.

Flaming Bow: In volume 1 it was shown that Laius has access to a bow of fire and arrows of flame to utilize. He only summoned it to show that he had no intention of using the Gifts of Perseus to do battle. After summoning Algol, Laius used the bow in combination with her attacks to try and kill Izayoi who was then running around. The arrows possessed a sort of homing effect and trajectory like a snake after its target. After Izayoi proved he could not be harmed by the arrows Laius returned the items to his Gift Card.

Blacksmithing: Laius is the descendent of one related to Hephaestus, the Greek God of Blacksmithing, and as such he possesses great abilities in creating replicas of famous Gifts or even restoring Gifts to their original form. The Boots of Hermes and the Hades Helmet worn by the Guards of [Perseus] were all created by him. Laius was able to bring Almathea back to life with the Golden Fleece and Cornucopia, as well as restore Deen to working capacity even with a few pieces missing. 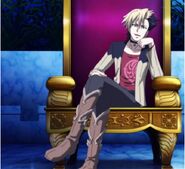 Add a photo to this gallery
Retrieved from "https://mondaiji.fandom.com/wiki/Laius_Perseus?oldid=20686"
Community content is available under CC-BY-SA unless otherwise noted.