He was the leader of Six Scars and once actively worked beside the Draco Greif Leader as an advisor. Now retired, he passes the leadership to his youngest twenty-fifth son, Porol who managed to clear his game.

Almost a full cat Kemono that has a gentleman look in his suit and behaviour.

Patient enough to handle the two problem kids Asuka and You as his students. Calm when thinking up of plans to win the game.

Asuka and You- Their mentor for their Gifts. They respect his plans but always feel frustrated since the plans are to restrict them from going all out unless it is a dire situation.

Izayoi- Seeking him out for the Alliance, Izayoi was informed of the decision of the transfer in leadership. Garol then told him to come back at another time to ask the new leader.

Meeting You by chance at the palace of the dragon, they quickly became acquainted as they searched for the clues to meet the game winning conditions. After the dragon attack saga, You approached him to be her mentor in hope that she could use the experience of a DracoGreif Alliance previous advisor to good use. Soon after, Asuka had also approached him for help with her Gift that couldn't seem to avoid destroying other Gifts. 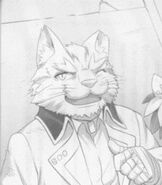 Add a photo to this gallery
Retrieved from "https://mondaiji.fandom.com/wiki/Garol_Gundark?oldid=14164"
Community content is available under CC-BY-SA unless otherwise noted.