Galdo Gasper (ガルド＝ガスパー Garudo = gasupā) Is the leader of [Fores Garo], a community backed by the enigmatic [666 Beasts] and its demon lord. Although he acts as if he is a Demon Lord, he forces others to accept his gift game challenges by kidnapping and blackmailing.

Galdo is a large, green eyed werebeast that can take on two forms; one as a tiger or a beast and one as a human. When he is human, he has yellowish-blonde hair that spikes up with a single large strand laying in front of his face, pointed ears that almost seem like hair at the tips, and sharp teeth. Galdo's suit is a unbuttoned, dark grey jacket with three black belts sowed onto the shoulder and a singular belt around the cuffs in place of buttons. The left side of the jacket is stamped with the symbol of [Fores Garo], a gold chameleon disconnected by an x shape. A light grey waistcoat is placed over a white dress shirt with a red bowtie around the collar. His trousers are a similar dark grey as the jacket.

In his beast form, he takes on a humanoid tiger form. His fur is a golden yellow with black stripes and a white underbelly.

When turned into a Demon Beast, Galdo takes on an entire animal appearance, that of a large, white tiger with black stripes, a flowing white mane and red eyes to signify his being turned into a demon.

Galdo presents himself as a gentleman and fails. He is quite arrogant and believing himself to be entitled to things due to his accomplishments. He constantly tries to find ways to improve his community so he can take on the communities that reign in the north and south, and so uses underhanded tactics like kidnapping children of other communities to make them submit and be dissolved into his community. Like the beast he is, he has a lot of pride which can be wounded easily and thus causes him to fly into a rage. Galdo is unable to keep himself calm under pressure and breaks with ease, along with being incredibly persistent, such as when he tried to convince Asuka and Yō to join his community.

No Names: Galdo antagonizes the group whenever he had the chance, belittling Jin and the community as a whole after their fall to the Demon Lord. However he was determined to win over Black Rabbit simply to have the [Aristocrat of Little Garden] working for him. In the end it was the efforts of Asuka and Yō that caused the end of his existence.

666 Beasts: While his community is aligned to them, it is clear that Galdo's relationship with the Demon Lord there is strictly business related.

Galdo was once a tiger living in the jungle. His farthest memory reaches back to when the area he lived in was burned down, causing him to have a natural dislike of fire. One day he was able to acquire enough spiritual power to transform into a Human. With this he created the Fores Garo, becoming the leader in the process. Somehow he gained the backing of [666 Beasts] and their Demon Lord, and has been able to impose unfair Gift Game challenges against his opponents. Even when others refused, he would have subordinates kidnap the children of the community to force the opponents to play. Galdo hated the crying of the children and so decided to kill them the first day they arrived while holding up the lie that they were all safe.

Galdo showed up and introduced himself to Asuka Kudō and Yō Kasukabe while they sat at the small restaurant, asking if they, along with Black Rabbit would join Fores Garo. Galdo provided the information regarding his community's accomplishments in taking over the area. He also described how it was Jin Russell's community became the [No Names] as well as the existences of Demon Lords and their power.

Galdo was confident they would join him due to his community's status, and thus was taken aback when Asuka refused for both herself and Yō. Before he could try to persuade them, Asuka activated her Gift, forcing him to obey her every command. Galdo was forced to describe how it was he forced the surrounding area communities to submit to his, kidnapping the children and using them as hostages for the communities to bet their flag and name during his challenges. When asked what happened to the children Galdo told the group he ate them. Asuka released him from her control and he changed into his weretiger form to kill her. However Yō stepped in and easily flipped the beast as well as pinning him to the ground. Galdo was given two choices; to run away and never be seen again or be properly judged for his actions. However Asuka changed her mind. From there Galdo was given the challenge of a Gift Game, where if he won the [No Name]s would keep silent about what they learned, but if he lost, then [Fores Garo] would disband.

Galdo returned to his headquarters to create the Gift game. However after witnessing the girl's Gifts and hearing rumors that a boy was able to defeat a [Divinity] Gift Holder he began to realize he reached the end. A visitor approached him from the windows, offering him a chance at victory. At first he believed it was reinforcements from [666 Beasts], but the visitor denied that. She offered him a new Gift to use as well as creating the game for him. Even if it would be seen as an act of betrayal to [666 Beasts] if he trusted an unknown stranger, he took the offer. The visitor was revealed to be a Pure Blood Vampire and gave him the Gift of Beastification, turning him into a Demon Beast that relied on feral instincts. When an aide came to Galdo's office, Galdo killed the messenger on instinct.

Galdo, as a full fledged tiger, participated in the Gift Game <<HUNTING>> which required the Game Stage to be the [Fores Garo]'s residential District and that only a specific weapon be able to defeat him, making all other gifts useless against him. Galdo remained in his office until the Gift Players arrived. Galdo was protecting the Silver Cross Sword that can be used to kill him and fought Yō while Jin ran away on Asuka's command, carrying the aforementioned girl with him. Galdo landed a blow on Yō and chased her out of his territory.

Galdo's mansion was set on fire by Asuka and the tiger began fighting with the girl. When she ran Galdo chased after her through the jungle like district until they reached a dead end. Galdo charged at Asuka until he ended up being entangled by the vines under the control of Asuka. His forehead was stabbed by the Silver Cross Sword, killing him instantly and turning his body into dust. With his death [Fores Garo] was disbanded.

Beastification: A Demon Gift granted to Galdo by Leticia. It turns Galdo into a demon beast, increasing his strength and speed. At the same time it gives Galdo the power to change the environment around him. During the Gift Game he changed the residential district into a jungle.

Therianthropy Technique: A skill that allows him to take on the form of a human or a beast.

Werebeast Strength: As a non-human Galdo possesses a strength that cannot be compared to that of a human's. Galdo, when transformed, was able to easily flip the table the group sat around at the cafe. When demonified Galdo's strength increased to where he could overpower Yō who utilized the power of the elephant to take him out before. 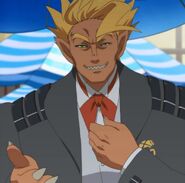 Retrieved from "https://mondaiji.fandom.com/wiki/Galdo_Gasper?oldid=15414"
Community content is available under CC-BY-SA unless otherwise noted.