The Female Shop Assistant (女性店員 Saleslady) is the nameless attendant that assists Shiroyasha and Kouryuu in their day to day responsibilities. Most of the time she is the one who ends up having to stop their antics, depending on the person.

The Shopkeeper is a blue eyed young woman who has dark blue hair tied back in a bun with her bangs parted to the sides, two strands of hair not pulled back and instead let lose. She is usually wearing an apron with a broom in her hands with black getas and white socks as footwear. When not working at the shop the apron is removed, revealing a simple blue kimono with a yellow obi tied around her waist along with a green string tied around the sash.

The shopkeeper is initially perceived as a very unpleasant type of person, refusing to deal with the No Names because they have nothing to represent them, and thus to her means they are untrustworthy to work with. Though this is simply her remaining professional and following the rules. Loyal and hardworking, the shopkeeper acts as a personal assistant to the Floor Master of the East Side, Shiroyasha and Kouryuu.

Easily teased and very strict in keeping her schedules.  She's also portrayed as a very conservative female in the story.

Shiroyasha - Her master who always makes her angry when she does things like inviting the No Names into the shop. Even so the shopkeeper serves her faithfully and is well aware of what Shiroyasha can do.

Saurian Demon King - She took on the role of his personal assistant to get him used to the life as a Floor Master and continuously plans his schedules and keeps him to it. It was also shown that she can be lenient enough at times if she sees her charge needing to so something important. (ie. collecting results for blood sample) But she does not push into the matters that her master does not want to reveal to her.

Sakamaki Izayoi and Kudou Asuka - They teased her a lot after finding out that she was actually a nice person to tease, especially with her overreacting to small harmless comments that made her embarrassed. Needless to say she dislikes the two.

Not much is known about the Female Shop Attendant's past except that she learned how to utilize a naginata and came under Shiroyasha's employment.

First introduced in volume 1 where she didn't want to allow the No Names into her shop for she knew that they wouldn't have the money to purchase anything in there and there was her shop reputation to keep as well. However Shiroyasha allowed entrance and thus she had no choice but to do the same.

The assistant was adamant on trying to deny the No Names entrance into the Shop. However Black Rabbit taunted the assistant with the Problem Children's recent accomplishment, the defeat of the cause of the sudden drought in the east, the KanBatsu. The assistant was in shock at the prize but even when shaken she did not allow them entrance. Shiroyasha however allowed the group to enter and the shopkeeper had to step aside.

As usual the Shopkeeper tried to turn away the group comprising of Izayoi, Asuka, Yo and Jin, but failed due to the timely arrival of Shiroyasha. With great disdain the assistant had to let the No Names into the shop. After the events of the Rise of the Fire Dragon Festival, the shopkeeper is seen trying to clean the rooms but Shiroyasha remains on the floor watching the TV, thus obstructing the assistant's work.

The Female Shop Assistant tried once again to prevent the entrance of the [No Name]s. As Izayoi contemplated on ways to make her cry, Shiroyasha immediately said she did not tell the girl and for the assistant to let everyone in. Reluctantly the shopkeeper did so.

As the [No Names] were the ones who defeated the dragon Ophiuchus, the shopkeeper was to give them prizes for the defeat of the [Draculea Demon Lord], including full rights to Leticia. She offered a second prize, but was taken aback by Jin's request of wanting the land that the [No Names] once possessed in the sixth gate. Originally they could not have it due to the lack of a flag, but Jin announced that he planned on forming an Alliance Flag to compensate for the lack of a flag.

At the upper region at the outer gate 6243 in front of headquarters of the “Great Sage who Suppressed the Heaven” Shiroyasha, the shopkeeper and Black Rabbit were talking about the Bull Demon Lord. They found it strange that nobody was there until they were surprised by the appearance of Roc Demon King. Black Rabbit and the shopkeeper were surprised that a Garuda had gone down to the position of a Demon Lord. However after hearing Karyou's story the assistant calmed. When Black Rabbit backed down from fighting the Garuda, the assistant decided to trample on the pride of the Moon Rabbit even more, causing her to run away. As such the assistant was ordered to go after her, having felt a tad guilty about it already.

The shopkeeper was running through the Underwood Underground City festival grounds when she was found by Izayoi and Asuka. Originally ready to fight them due to the teasing, she revealed she was searching for several fairies, those being the Demons of Laplace. When they wouldn't answer her, the fairies revealed themselves and flew off, the shopkeeper following them in pursuit.

Because she was busy with the Demons of Laplace, she was unable to stop Shiroyasha from proclaiming the main gift game <<RIDER OF HIPPOCAMPUS>> to add the rule that all female participants would wear swimsuits. Because of this not only the participants but even those on staff were forced to wear swimsuits, the assistant included during the game. She remained as an assistant and observer for the gift game for the remainder of the festival.

The Shopkeeper became Saurian Demon King's personal assistant after Shiroyasha stepped down as [Floor Master]. She made a comment about Shiroyasha being able to complete the paperwork Kouryuuu struggled with, causing Kouryuu to be shocked. When Leticia arrived to speak with Kouryuu she left.

Gift Card: A Fragment of Laplace that she uses to contain her gifts, specifically her Naginata. The back of her card contains the stamp of [Thousand Eyes].

Naginata: A trusted weapon the saleslady keeps in her Gift Card.

Polewielding: Saleslady showed great maneuvering of a naginata during volume 5 when she threatened Izayoi and Asuka. 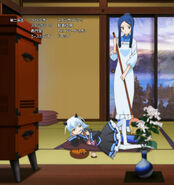 Retrieved from "https://mondaiji.fandom.com/wiki/Female_shop_assistant?oldid=16305"
Community content is available under CC-BY-SA unless otherwise noted.