Black Rabbit reveals the true reason for their summoning along with the tragic history of theNo Names. Meanwhile, Asuka and Yō learn the same information from a strange man called Galdo Gasper, who wants them to join his community instead. After learning of his community's dark secret however, Asuka and Yō challenge him to Gift Game, much to the shock and outrage of Black Rabbit. Later, Black Rabbit brings the Problem Children to meet a loli called Shiroyasha and challenges her to a Gift Game.

Black Rabbit and Izayoi Sakamaki are still in the East Side when Izayoi suddenly asks Black Rabbit why she summoned them there. Unable to hide it from him, Black Rabbit explains the situation of Demon Lords and the community they had before. Later, Izayoi agrees to help the No Name Community, much to her delight, remarking that it all sounded very fun and romantic.

On the other side, Galdo Gasper has just revealed the situation of the No Names to Asuka Kudō and Yō Kasukabe and discusses the possibility of them about joining his community "Fores Garo" instead of the No Names names. While Asuka and Yo both reject to join Fores Garo, Asuka uses her gift and commands Galdo under her own words. She makes Galdo explain how their community is able to achieve the victories when he is not a Demon Lord. He has stated that he would have his servants abduct the children in the other communities and then blackmail them to participate in his Gift Games by holding the children hostage. And when asked where is he keeping the children now, he reveals he has killed them all much to their surprise. Galdo says the children's constant wailing annoyed him so much that he savagely killed them without even realizing it. But as long as he kept the charade of the children being held hostage, nobody will suspect that the children are dead, for it will anger the cohesion of his community if the info gets out in public. And he got rid of the children's body's to destroy the evidence. Asuka has heard enough and commands him to stop talking. She tells Garo that he's the very definition of scum and calls him Mr. Fake Gentleman then snaps her fingers to release Galdo Gasper from her power, clutching his own hands, turns into a beast. He tries to attack them, but Yo Kasukabe pins him down by using her Gift. Asuka then says "How about you play a Gift Game with us?"

Meanwhile, Black Rabbit and Izayoi comes back and hears that Asuka and the others have agreed to play a Gift Game with the Fores Garo. Black Rabbit is outraged to hear that, but soon calms down, saying that she was sure Izayoi could beat them. However, Izayoi tells her that he's sitting this one out because this is Asuka and Yo's fight, much to their satisfaction and Black Rabbit's disappointment.

After that, Black Rabbit leads them to Shiroyasha, or the manager of Thousand Eyes. Shiroyasha comes, rapidly, towards Black Rabbit and they were flown to a pond of water. Later, Shiroyasha introduces herself as a Gate Master and the existence of the 7 gates in the Miniature Garden.

Shiroyasha challenges the three and brings a griffon to battle. Yo agrees to ride the griffon's back once around the Lake of the game board. She talks with the griffon, saying that she would bet her life, and soon she was off, flying with the griffon. A sudden blow of wind hits them and soon Yo remembers her memories of her and her father when she was in the hospital. When the griffon flys to the finish, Yo falls from the griffon's back and her wooden carving gift from her father gives her the power to wake from consciousness, and walks on the air with the newly acquired Gift of the griffon.

At the end, Shiroyasha gives them each a new Gift Card and Izayoi receives the Code: Unknown gift. The setting switches to the destroyed community No Name where the trio are faced by damage dealt by the Demon Lord.

Later, we see Galdo Gasper and an unknown girl giving power to Galdo.

Characters ( In Order of Appearance) 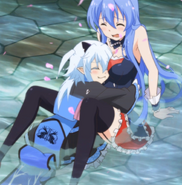 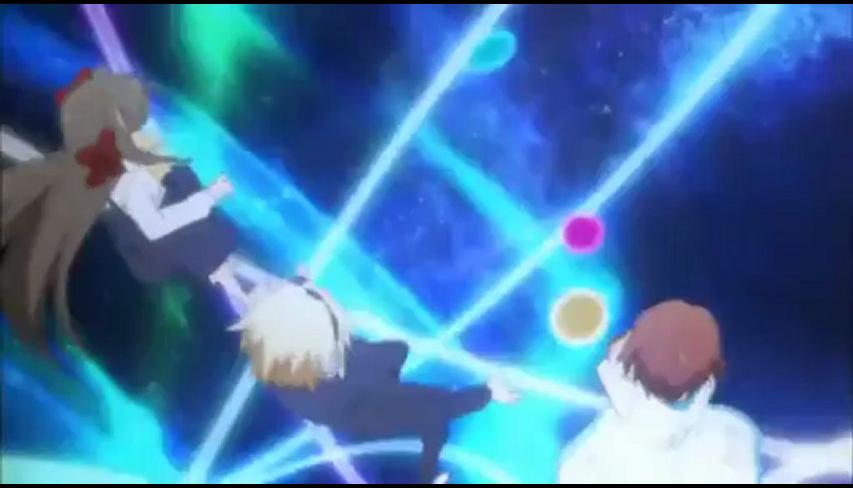 Retrieved from "https://mondaiji.fandom.com/wiki/Episode_2_-_Seems_Like_a_Crazy_Loli_Clad_in_Japanese_Clothing%3F?oldid=21394"
Community content is available under CC-BY-SA unless otherwise noted.