Deen (ディーン Dean) is an Gift created by the Rattenfänger community. After the <<PIED PIPER OF HAMLIN>> was completed, Deen was given to Kudou Asuka to keep as a Gift of remembrance that the [Rattenfänger] community existed.

Deen is a large red automaton with a singular, blue eye. The golem was crafted from the Red Sacred Ore, and thus its entire body is red with gold accents.

A giant golem crafted by the Rattenfänger community from the Red Sacred Ore they received from Seikairyuuou, the former leader of [Salamandra]. The golem is defined as possessing a steel soul, and is capable of speech, though only the one word; "DEEN."

Deen was originally seen as a piece of artwork on display in a Gallery Hall. Asuka and the nameless fairy both admired the steel giant. When Asuka read off the nameplate, the fairy jumped up and down on her shoulder citing her community's name and the creator of the Giant, Rattenfänger. Their admiration was short lived as then both were attacked by rats under the control of Ratten.

Asuka was saved by the community [Rattenfanger] and brought underground where Deen was located. The community asked of her to defeat Ratten and destroy the book that summoned them to Little Garden, giving her the Gift Game challenge to control Deen with her Gift. Once she was told that with the stone golem she could defeat Ratten, Asuka took on the challenge that the fairies presented.

Before Strum could assault Jin and Lily, Deen appeared and shattered the personification of storms. Asuka remained on his shoulder the entire time during the fight against the Strums and Ratten, commanding him to defeat the opponent. Upon the checkmate of Ratten, Asuka gives her one final chance, in a Gift Game where Ratten had to try and take Deen under her control using her music. Ratten failed to take control away from Asuka and vanished.

Deen and Asuka managed to save You, Calico Cat and a child from Pest's black winds, burning the winds as it came into contact with it's body. Deen remained on standby as Black Rabbit explained her plan to Asuka. By hiding in the rubble of the Chandra Mahal, Asuka was able to prepare Deen to throw the Spear of Indra. Summoning the spear, Deen took hold of it, and just as Pest was locked into place by Sandora, threw the spear upon command, piercing the Demon Lord.

The game ended and Asuka returned Deen to the location of the fairies. Before the community [Rattenfanger] left the Little Garden, the fairies bequest Deen and their last member Merun to the player. Asuka put Deen to use by having him help the children with the faring and tending to the plantation.

Deen was used as a ride for Asuka as they traveled through the [No Name]'s area. Along the way he ended up giving You and Izayoi a ride until the trio reached home. It was stated that Deen was helping out the farmland and assisting Asuka in several Gift Games. During the Titan's first attack on [Underwood], Deen was resummoned to fight and easily defeatd several Titans at once.

Deen was summoned as a defense against the Dragon assaulting Underwood. However he was not strong enough to be able to tackle it head on. Sala Doltrake, impressed with Asuka's will and determination to help her comrades, broke her dragon horn off and infused the item into Deen, giving it the power boost necessary to hold back the dragon Orphiucus. Deen was not able to hold it back for long and suffered extreme damages where parts of the automaton were broken off.

Due to the previous battle Deen was still unable to be used. However parts of him that fell off were instead used as materials to turn Coppelia into the Perpetual Motion Machine.

On request by Jack, Deen was fixed up by the leader of the [Perseus] community Laius. However Laius was furious that Asuka of all people was the owner of Deen. As such he made a deal with her; if she could not win the <<DUEL OF THE CREATORS>>, then Deen's rights of ownership would be transfered over to the leader of [Perseus].

Deen is a powerful gift fashioned to contain the power to defeat those summoned into Little Garden alongside [Rattenfanger], the [Grim Grimoire Hamlin]. Deen is strong enough to assault the Celtic titans, and even hold back the giant dragon from Volume 4 after receiving Sala's Dragon Horn. Once the Dragon Horn was integrated further into Deen, he is capable of emitting flames from its body.

Shapeshifting: Deen is a walking automaton with its own soul granted to it by the Red Sacred Ore, the same ore used to create Sun Wukong's staff. As such Deen possesses the capabilities to change it's size as well as extend its limbs, like it had done to destroy several Strum's in the fight against Ratten.

Solar Energy: Deen has the power to release a radiation similar to the sun, as he blocked the fog Percher released from reaching You, Calico and a child.

Dean's display sign, identifying him as 'Dean', created by Rattenfänger. 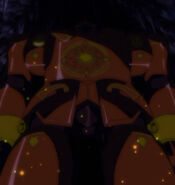 Dean's arm is able to stretch.

Add a photo to this gallery
Retrieved from "https://mondaiji.fandom.com/wiki/Deen?oldid=21285"
Community content is available under CC-BY-SA unless otherwise noted.