Not much is known of the cat's past, but it was revealed he used to belong to Koumei Kasukabe. When both visited Yō one day, Koumei gave the girl the wooden pendant [Genome Tree]. Afterwards, he grabbed Calico Cat and threw him towards Yō, much to the former's disdain. A few words were spoken before Calico caught on that Yō could understand him. Since that day Calico remained with Yō wherever she went. One day a letter fell from the sky with Yō's name addressed on it. As such he took the letter to the girl and perched on her shoulder as she opened it.

Calico Cat, as his name suggests, is a calico-breed feline. He has a mostly-white body, with a brown-orange back. His left ear is brown and his right orange. He has green eyes and a brown-striped orange tail with a white tip.

Calico Cat appeared to have a slightly sassy personality. This is further evidenced when he attempts to smooth-talk with a cat-persuasion waitress and back talks his former master Koumei when he was thrown. Even so the cat adores his current master Yō, willing to go to any lengths he can for her sake, such as when he stole Izayoi's headphones.

Kasukabe Yō - He is the main companion of Yō Kasukabe. Calico adores Yō and is willing to do anything to make her happy.

Kudou Asuka - While he hasn't interacted with her much, he is forever grateful that Asuka was willing to be Yō's friend.

Black Rabbit - The two did not interact much in the anime, but in the light novels he was treated as a equal to Black Rabbit as she was able to understand him.

Koumei Kasukabe - Calico's former master and friend. Originally he was with him all the time until he was given to Yō. Despite the somewhat rough way Calico talked to Koumei, it was obvious he cared about him as he was shocked to learn Koumei disappeared. If anything their relationship was similar to how Izayoi treated Black Rabbit, a pt that is to be teased and messed with.

Carol Gundark - Originally he flirted with her because of her 'nicely bent tail', but after episode ten he seems to have some sort of relationship with her. When it was revealed Calico was getting too old Carol decided to take him in the south side so he could relax.

Sakamaki Izayoi - Calico was never fond of Izayoi as he saw Izayoi as a threat of sorts to Yō. To make sure she would go to Underwood, he stole Izayoi's headphones to prevent him from going to Underwood and forcing Izayoi to give up his position to Yō so he could look for them.

Calico Cat arrived with Yō Kasukabe to Little Garden and landed in the large lake. Once Yō got herself and the cat out, she took a handkerchief to wipe Calico off. For most of the time Calico remained silent, only perched on either the girl's shoulder, in her arms or on her head wherever they went. Though when Yō, Asuka and Jin arrived at the cafe, Calico ordered for himself, which shocked Yō that the waitress could understand him. When the waitress, Carol Gundark, revealed she could understand the cat because she herself was a cat, Calico took the opportunity to flirt with her.

The arrival of Galdo Gasper cut short his time with the waitress. Calico listened as Galdo explained the reason behind the reason as to why the three Gift bearers was summoned to Little Gaden and the girl's rejection of joining [Fores Garo]. Calico was happy that Yō made a human friend through Kudou Asuka as both announced they would remain with Jin's community. For the rest of the time he remained silent, watching as Asuka made the challenge to Galdo.

Along the way to [Thousand Eyes], Calico Cat asked Black Rabbit a few questions (In the anime he was silent). He showed no reaction to Shiroyasha's appearance, and simply observed on Asuka's shoulder as Yō participated in a Gift Game against Gry. When she won though, Calico ran up to her crying, glad that Yō was safe. Afterwards the group returned to the [No Name] community ground and placed the Water Tree in the pedestal, causing water to rush out into the canals. Calico joined the girls as they bathed in the waters of the Water Tree, remarking that the waters remind them of the world he and Yō lived in.

During the next day's Gift Game against [Fores Garo], Calico Cat ended up ensnared by the demonic vines, and was not set free until the game was ended. Due to Yō's injured he remained with her while she was healing and even accompanied her as she delivered cookies made by the children of the community to Asuka and Black Rabbit. He wasn't seen again till the victory party after the defeat of [Perseus]. He was the first to notice the stars vanishing from the sky, the sign that the [Preseus] constellation was being removed.

Calico did not travel with Yō to the North Side, but rather was taken there with Leticia. Calica remaind on Lily's shoulder as Leticia, Lily and Asuka traveled around the city until Asuka ran off after a fairy. As a result Leitica told Lily to head back to the shop and Calico went with her. Soon after though he was with Yō, cheering her on as she participated in the <<DUEL OF THE CREATORS>> Gift Game being heald as the main entertainment for the [Rise of the Fire Dragon] festival. During the next day's game he remained with Jin. When it was revealed that Yō was able to locate the exit as well as fidning the secret to Ayesha's attacks, Calico Cat admitted that Yō would be able to discover that info due to her heightened sense of smell. At the end of the game Calico congratulated her despite her not winning the game.

He wasn't seen until the restart of <<THE PIED PIPER OF HAMLIN>>, gripping onto Yō's shoulder as she was trying to save a child. Sadly she was unable to and both herself and the cat had to be rescued by Asuka. Once the game was over, the [No Name] returned back to their home. The anime added a bonus scene of Calico Cat drinking a juice out of a straw shared with Carol Gundark.

Yō was feeling down about her recent accomplishments and how she couldn't help out with the farm like how Asuka and Izayoi had. Calico Cat began to see Izayoi as a thread to Yō's happiness, and so plotted a way for her to go to Underwood like she had wanted. When Izayoi was taking a bath with Lily and Leticia, Calico Cat dug into the basket holding Izayoi's clothes and stole his headphones. As a result Izayoi stayed behind and Yō took his place to go to Underwood. Calico accompanied her, happy that Yō got her chance, but did not tell her the truth. However, Yō did find out what the cat had one when she found the headphones in her bag. As such Calico was forced to fess up and felt guilty that Yō saw this as her fault since she was his master.

The attack on [Underwood] forced Calico Cat to locate Asuka and stay with her. Though a nearby titan attack caused him to be injured.

Calico Cat as since then vanished from the story, but has been stated to be living in the South Side under the care of Carol Gundark and her family.

As he is a cat from outside Little Garden, he has no Gifts or abilities like the many beastmen that exist within the world. However he does posses average intelligence and is quite clever with his questions regarding Little Garden. He is able to hold up a conversation with Yō, Koumei, Carol and even Black Rabbit with relative ease, and was able to devise a good plan to have Izayoi give up his chance to go to Underwood and hand it to Yō. 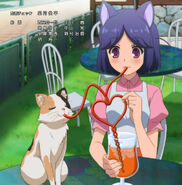 Add a photo to this gallery
Retrieved from "https://mondaiji.fandom.com/wiki/Calico_Cat?oldid=19334"
Community content is available under CC-BY-SA unless otherwise noted.